Every so often a late-night TV host comes along to show us just how abysmally bad we are at geography.

Granted: these people are under the sudden stress of a camera crew, and the editors are under the effects of selection bias. Still, there's enough endemic geography ignorance that Jimmy can reliably churn out half a dozen of these depressing "can you name a country?" bits.

At the other extreme, you have the London taxi driver. These walking (read: driving) atlases have to master The Knowledge— the world's most exacting geography test (actually a set of four progressively more difficult exams). Aspirants absorb the "Blue Book," a navigation bible of 320 sample runs, more than 26,000 streets, and every single location of interest in London. It's a process that can take more than four years.

These are the zen masters of spatial thinking, and they have the brains to show for it: the right posterior hippocampus1 is significantly larger in these taxi drivers than in control subjects. And the more experience you have as a cab driver, the more pronounced this difference becomes. [1]

Somewhere between these poles is where most of us aim to sit. This is because geography matters. It matters because most of us have opinions on what's going on in other places. And most of us can't keep those opinions to ourselves. If we want to be slightly more informed citizens, we'd do well to brush up on our geography.

But there's a more practical, less abstract reason to train your knowledge of geography: expanding your spatial thinking is perhaps the best way to improve your general-purpose memory.

That's because we can directly convert spatial thinking into memory storage through a technique known as the "method of loci" (aka memory palace). How it works is as follows: when you want to learn a new sequence (or collection) of data (e.g., a speech, a timeline, the steps to a dance, anything), you imagine yourself walking through some space you are familiar with. In your mind's eye, you place the objects you'd like to memorize in this imaginary space. When you want to recall the information, you just imagine yourself walking through the same space and retrieving the items.

Let's say I want to memorize the order of the first five Roman emperors after Caesar (the rest can come later):

I choose as my space the street in front of my house. First, in the middle of the intersection, I place a sweltering sun, representing the oppressive heat of the month of August. I walk past it to the corner, where a tiger jumps out at me through a shop display. He's followed by Calvin (the tiger turns out to be the peaceful Hobbes). As I'm recoiling from the shock, the pair bursts into a cloud of smoke. They leave behind only a sad pile of ashes. Out of the smoke enters Neo, in his full sunglasses-and-trenchcoat glory.

You'll notice, I placed objects that sounded similar to what I'm actually trying to memorize—not the objects themselves. One of the most important tricks of the mnemonist is to convert the abstract into the practical. It's even better if they become animate characters. The other trick is to make your mental images as action-heavy (also violent and raunchy) as possible. Both serve to hijack our primitive ape brains.

The method of loci is not just a clever trick; it is the primary means by which oral traditions store knowledge from antiquity on to today. This allows, for example, the Matsés people of Brazil and Peru to memorize a 500-page encyclopedia of their traditional medicine. And the Hanunóo of the Philippines to classify 1,625 plants. Or the Aboriginee to memorize sung sequences of locations and information ("songlines") that can span almost a thousand kilometers. [0]

Train your brain in geography (especially local geography), and you have more locations for mental storage and more machinery for connecting things.2 Up to a point. The stronger navigational memories of cab drivers turns out to compromise their abilities to retain new visual associations [2]. There's a trade-off at play between the anterior (more visual) and posterior (more spatial) hippocampus.

Still, there's reason to remain optimistic about the benefits of some geography training. Just because we can see that it's not healthy to be steroidal bodybuilder doesn't mean we should give up on exercise.

Also, most of us (cab drivers included) never learn to use the method of loci. We don't learn how to translate our navigational memory into more general-purpose memory, so we end up thinking (rightly) of geography as a stuffy and narrow-minded exercise.

This does not have to be. In the rest of this article, I'm going to set out a few tricks to make it not just easier to memorize geography but more fun (yes, actually) and readily transferable. So you're not just the arrogant geography snob.

As always, we're going to be using a spaced repetition system. If you don't know what that means, start with my previous article on the subject.

As a budding geographer, you'll want to start at the top. First, understand the two-dimensional continents and countries in coarse detail. Then, zoom in for further detail as you learn states and provinces, zero-dimensional cities, towns, and one-dimensional roads and rivers.

2d regions are the easiest to memorize because their unique shapes help us distinguish them. You're going to want to play that game you played as a kid where you try to see shapes in clouds. This shapiness is less present with 1d roads and totally absent in 0d cities.

For regions, you're only going to need two kinds of cards:

For both, it's best to use two-color maps. This way you're not distracting yourself with a million other pieces of information. Compare the following examples:

The second type of card does require more effort to make, but fortunately you can almost always piggyback off of the work of others.

With the "Name + Blank map -> Region" card, make sure you include a blank map. It becomes a little too abstract when you're prompting yourself with only words.

First, if you can blow up the map, do so (provided you know where in the world the map is).

When you look for blown-up maps, try to avoid isolated maps. You still care what's going with the neighboring areas.

Second, with islands, instead of focusing on the shape, focus on relative positions. This is a general piece of advice: the shape of a country really doesn't matter all too much (beyond deciding the total area of a country); it's who is on the other side of the border that makes the country. And the best way to emphasize this relative positioning is to come up with constellations (see subsequent section on "Cities, towns, peaks, and landmarks").

Also try to avoid maps like the following. When you're looking at a real globe, you're never going to have these lines so cleanly delineated. 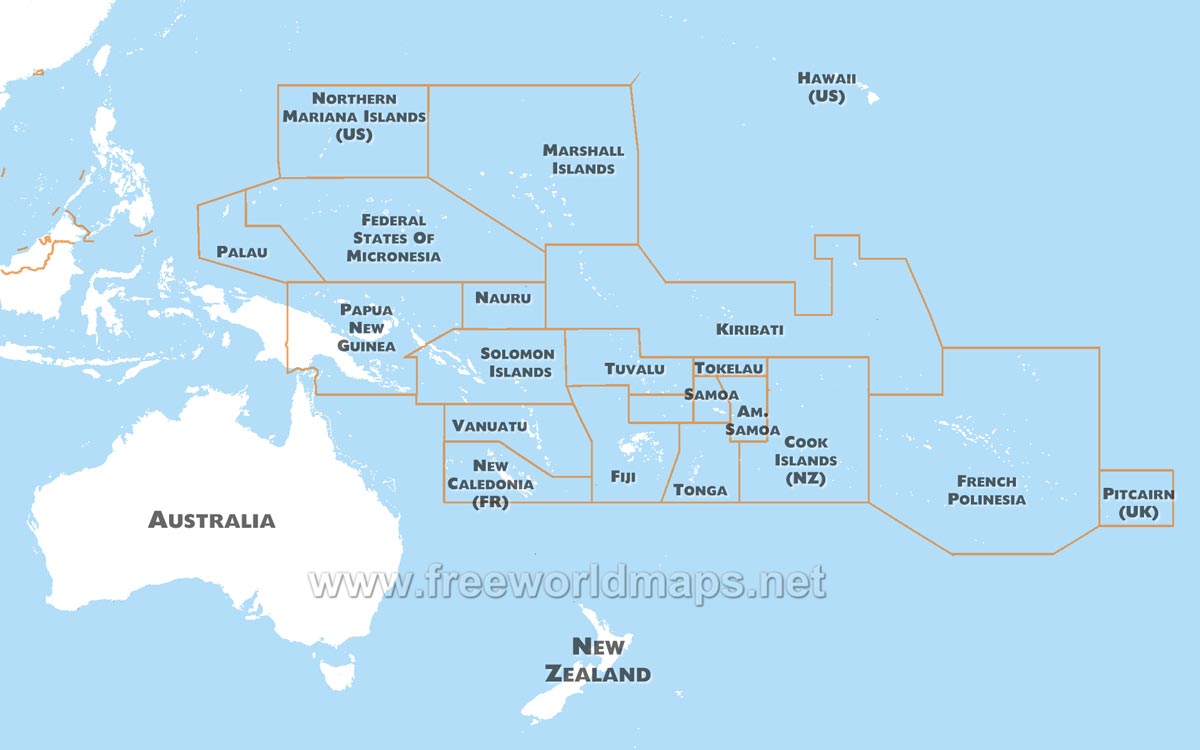 One difficulty, especially when you're learning the provinces of a country whose language you don't speak is that the names will be hard to keep apart. I'm thinking of China's Shǎnxī, Shānxī, and Shāndōng, or its Húnán, Húběi, Hénán, Héběi, and Hǎinán.

One solution, obviously, is to learn the language, but that costs a lot of time. Better to learn the bare minimum. If you know that "nán" means south, "běi" means north, "xī" means east, and "dōng" means west, it starts to get easier.

Whenever you can, use a mnemonic association to form something more memorable: "hey, nun" and "hey, bae" are much easier to keep apart than "Hénán," and "Héběi."

You will always want to include some picture of the region. Including a visual is not just going to ground you back in reality (you think about where a city is instead of the letters its name consists of), but it'll be vastly easier to memorize (use that full hippocampus).

You'll also want to avoid pictures of the region that don't include the particular location of the capital. It's relevant to know where a capital is.

Cities, towns, similar landmarks are hard to learn because they have no identifiable features in and of themselves. They're usually just dots on a map.

To learn these, you'll have to invent identifiable features. And the best way I've found to do that is to take inspiration from the stars: group cities into constellations because constellations are much easier to place on a 2d map than individual points.

Even simpler: group cities into triangles, the simplest 2d shape. If you tile the area you're learning with enough of these triangles, you'll have an easier time not only placing the vertices but also figuring out relative positions.

Let me give you an example. In May, I'm planning to move to the Bay. Nerd that I am, I've decided to absorb the local geography long before we step on a plane.3

What I'll do to remember the triangles is to create a little story for each one. Take San Francisco—Oakland—San Jose. San Francisco becomes pope Francis, Oakland, an oak tree, and San Jose, well, a bevy of "hoes." The visual I paint in my mind might go something like this: Pope Francis is cruising in his pope mobile convertible with two hoes in the backseat when he swerves off-road and crashes into an oak tree, killing all three...

...It shouldn't be tasteful, it should be memorable.

One more? Okay, a pole-vaulter jumps over half a dozen scantily-clad men only to fall off the mountain precipice she had failed to see.

First of all, we need a way to turn road numbers into something more tangible. Roads turn out to be a perfect usecase for the Major system (a way to convert digits into sounds, thereby numbers into words).

I've already written about it before:

Roads are easier than cities in that they have more of a shape to go off of. But they're harder because they wind on and on.

The first trick is to break the roads into chunks and to use a variation of the constellations technique.

With the Major system, 92 might become "Pan." To join them together, I might imagine a pirate yelling at some unfortunate guy with a "hey, matey, walk the plank," while brandishing a threatening-looking pan in his one remaining hand. For this to work, you'll first want to learn the destinations before learning the roads.

Another trick is to focus on intersections.

A final trick is to look at groupings of parallel roads.

These all span from northwest to southeast (in order from east-most to west-most). I might turn these highways into, respectively, knives, taste, thieves, and chefs. Visualize a knife chopping a tongue in half. The camera pans out, and we see the tongue in question was trying to get a taste of a delectable-looking pastry. Zooming out again, we see the tongue belonged to a stereotypical thief in black-and-white stripes, who was planning to steal the pastry. A final pan, and we glimpse the satisfied looking chef who defended his pastry with an act of smug violence.

Done right, memorizing is anything but boring. On the contrary, it can be an exercise in creativity. You're fighting a war against your monkey brain; you know that it will do anything it can to slack off and forget, so you offer it the richest images you can come up with: pictures and stories it won't ever forget.

When you play this game, you should wary that you don't go too far. That it doesn't become an abstract exercise in reciting these images, but you constantly ground them back in reality.

I recommend to introduce only a few new cards a day, and, whenever you encounter a new card, to browse its Wikipedia page for a minute. You'll often find a few interesting tidbits that give the place a little more life. Because, ultimately, you're trying master geography so you have a better understanding of the real people living in a real place.